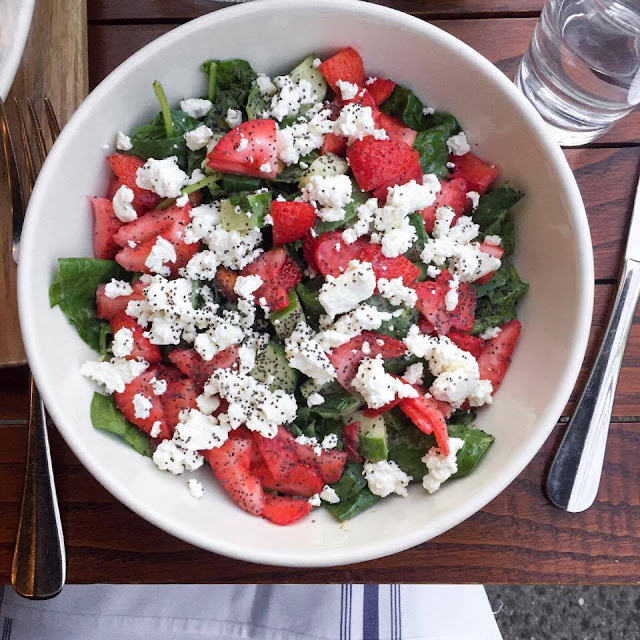 The big news in my corner these days is that I recently moved to a new apartment in a neighborhood that is totally new to me: Astoria! Having spent three years living in Harlem I was ready for a change and was drawn to Astoria for it's affordability, laid back residential feel, and plentiful tasty restaurants. While I've been pretty busy with getting myself moved in and settled into the new space, I have found a little time to explore the neighborhood as well and check out some of the local restaurants. I wanted to highlight a few of my favorite discoveries so far for anyone curious about the neighborhood! 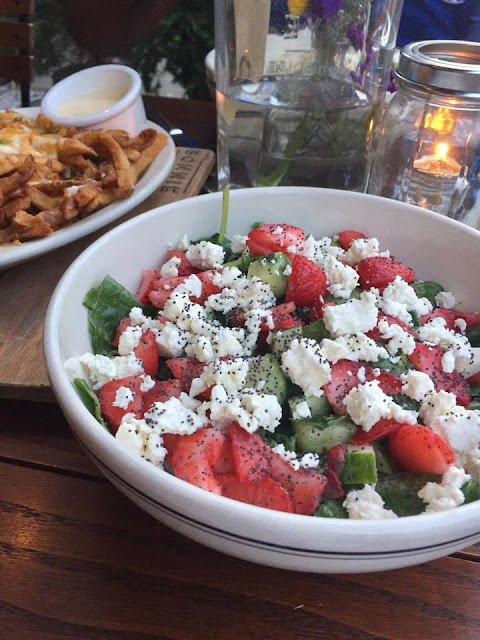 Right down the street from my new place is a cute restaurant and bar with outdoor seating called The Bonnie. Since it is close to where I live this was one of the first places in the neighborhood that I tried, and since their menu all looked so good I've been back for more! The first time I went in I ordered the Burrata BLT sandwich, and it was phenomenal. Served on thick cut bread with crisp bacon and soft burrata, this was a total win. They also had a cocktail special that night which involved gin and blackberries that was a total hit too. The next time I went back (only a short time later!) was to try out some of the salads I had seen other people enjoying on my first visit. I got the strawberry poppyseed salad and loved every bite. Not only was this salad pretty to look at with all the bright colors from the strawberries, greens and soft white cheese, but every bite had something tasty in it, including almonds, and cucumbers and feta. I also have my eye on their fried chicken sandwich.... the next time I'm there I'll be sure to tell you how it is. 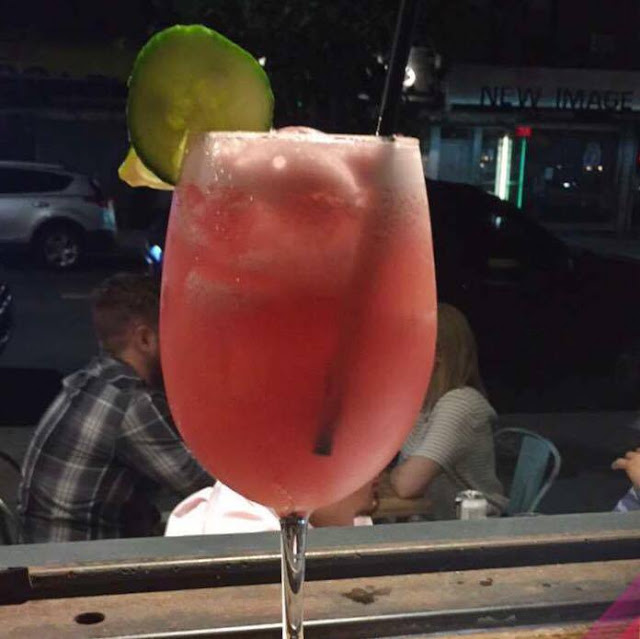 Exploring along Ditmars Ave one evening landed me at the Pomeroy which was blasting all the best '90s rock songs out the open front windows. So many of the drinks on their menu looked tempting but I settled for the Down by the Bay, a watermelon and cucumber cocktail that was so tasty and summery. Made with fresh watermelon juice this drink was perfect for a hot summer night sitting in the open air seats by the window.

The Ditmars area of Astoria is known for its Greek restaurants and plentiful bakeries. So far I have only tried the Lefkos Pyrgos bakery, but I know that I'll be hitting up all the rest soon! At Lefkos Pyrgos I ordered the baklava cheesecake to share... and OMG was it delicious! A bottom layer of some of the best cheesecake I think I've ever had, with a top layer of flaky Greek baklava combined for an amazing sweet treat. So many of the cakes and sweets in their case looked to-die-for so I know I'll be back here before long! 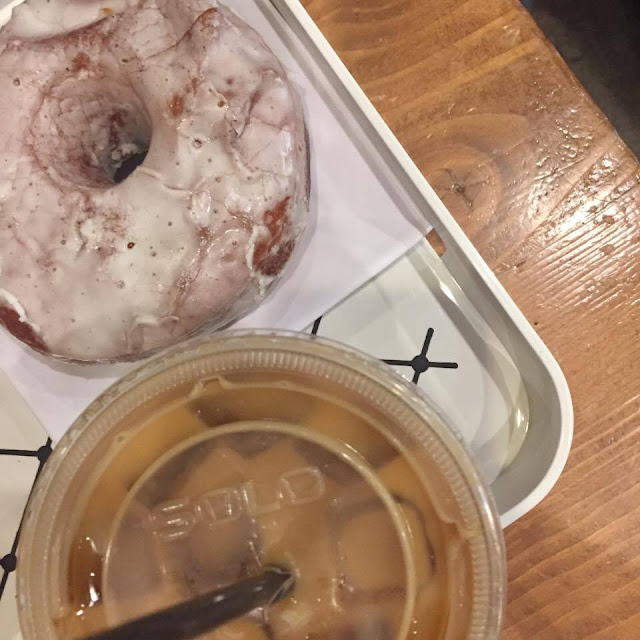 One of the most exciting discoveries I have made though, is that I live right down the street from some of the best bagels I've ever had -- and that's saying a LOT. I am very picky about bagels, and have so far been largely unimpressed with most of the bagels I've tried in New York. I knew the good ones had to be out there somewhere but I had yet to discover them. I like my bagels to be dense and flavorful - I can't stand when they are fluffy and chewy (think Dunkin or anything similar). Up until my move to Astoria the best I'd found were Tomkins Square Bagels and Blackseed Bagels, both of which are very good, but somehow weren't quite perfect. But moving to an apartment right near the Astoria location New York City Bagel and Coffee House has changed everything!! Their bagels are hugeeeeee and so tasty, and definitely my favorites in New York! On my first visit I got an egg and cheese breakfast sandwich on a sesame bagel and it was so so so good. I had to save half of it for later though because the bagels are so big! On my second visit I had a toasted bagel with bacon scallion cream cheese which I gobbled right up! And just to top things off, they also serve Dough doughnuts in the cafe - so yeah that's dangerous to walk by every day! Phenomenal bagels AND phenomenal doughnuts all in one place?! Almost too good to be true. 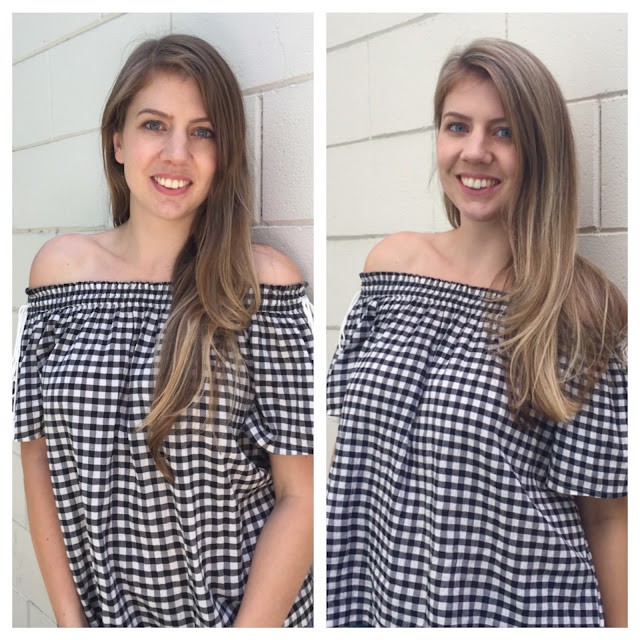 Hello and happy summer! Last month I decided to change up my hair a bit, and went back to blonde just in time for the height of summer! I had let my highlights grow out for the past two years so my hair had been looking pretty dark with a slight ombre fade from my natural darker color on top to a lighter blondish color at the tips. After trying out my natural hair color for a while I was feeling ready to get back to a brighter blonde shade that I'm more familiar with, since I've kept my hair blonde for most of my life. I also can't believe how long my hair had gotten! I tried to keep some of the length but had the stylist trim up the damaged ends a bit for a smoother look. Anyway I wanted to share a little before and after pic of the results!
My natural darker shade still peeks through for a textured effect, but the addition of light highlights is summery and fun. The change looks subtle here but as the highlights have matured I am feeling great as a blonde again.
Top: Loft. Bag: Rebecca Minkoff. 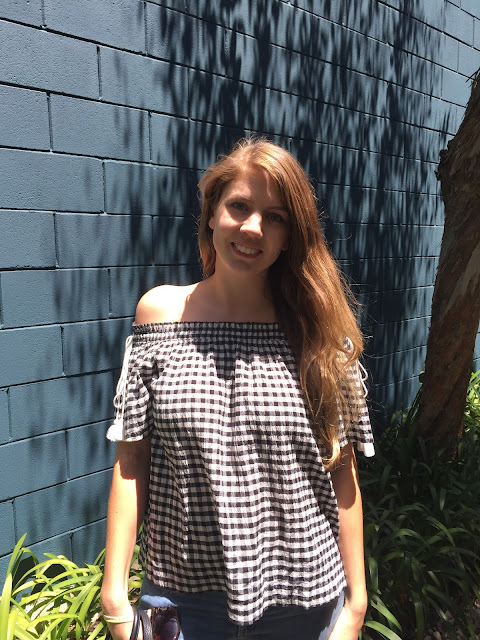 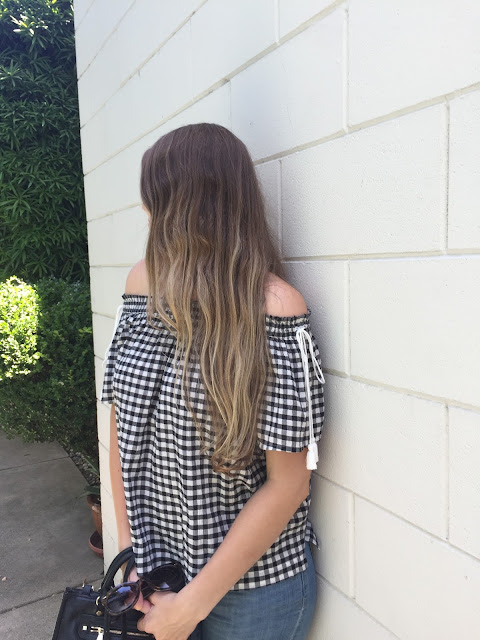 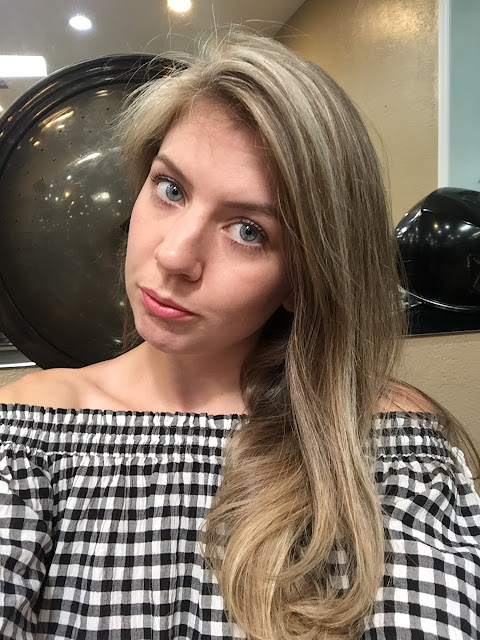 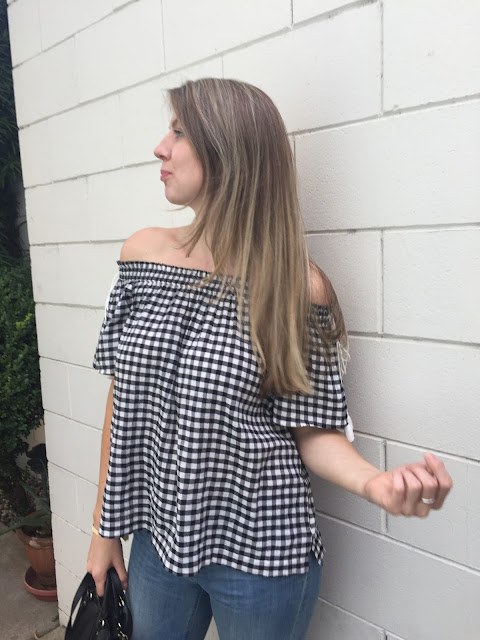 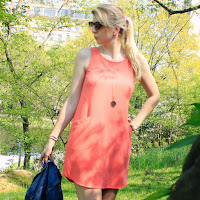